In this highly acclaimed work published in 1974, Elder presents the first longitudinal study of a Great Depression cohort. He follows 167 individuals born in 1920-21 from their elementary school days in Oakland, California, through the 1960s. Using a combined historical, social, and psychological approach (known now by the term “life-course”), Elder assessed the influence of the economic crisis on the lives of these Californians over two generations. In subsequent work, he followed a younger cohort of Berkeley children, born in 1928-29, into the middle years of life and compared them to the Oakland cohort on the personal impact of both the Great Depression and World War II. This 25th anniversary edition (1999) includes a new Chapter 11 on this cohort comparison along with an account of the emerging field of life course research and theory. — For more information: www.amazon.com. In Children of the Land, the authors ask whether traditional observations about farm families – strong intergenerational ties, productive roles for youth in work and social leadership,dedicated parents and a network of positive engagement in church, school, and community life – apply to three hundred Iowa children who have grown up with some tie to the land. The answer is a resounding yes. In spite of the hardships they faced during the agricultural crisis of the 1980s, these children, whose lives are followed from the seventh grade to after high school graduation, proved to be remarkably successful, both academically and socially. — For more information: www.amazon.com. 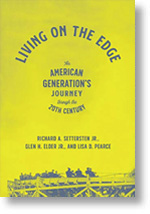 The story of this book began as Elder put the finishing touches on Children of the Great Depression in 1972-73 at the Berkeley Institute of Human Development. In midst of his archival work, he discovered that the Berkeley Study had followed both the parents and a study child (born in 1928-29) over time. By this time, the parents were in old age, providing a rare opportunity to assess the impact of the dramatic social changes of the revolutionary 20 th century on their lives. Elder invited Settersten and Pearce to assist him in turning the chapter drafts into a book. — For more information: www.amazon.com. 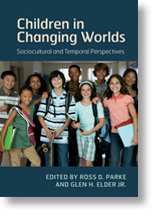 Over a quarter century ago, a book by the title “Children in Time and Place” asserted that an interdisciplinary approach to the study of children’s development would greatly enhance our understanding of development by drawing upon developmental studies, history, and sociology. In many respects, this book shows conclusively that much progress has been made along this path during the past quarter century. — For more information: www.amazon.com.

How to Study Lives: Working With Archival Data illustrates how to use the method employed in archival research for Children of the Great Depression. Beginning with an introduction to the general issues in working with archival data, the book takes the reader through steps in the recasting of data and question, using substantive examples from the life course, such as temporal patterns of physical and emotional health as well as pathways to retirement. — For more information: www.amazon.com. This volume explores the implications of a changing society for children’s lives through the insightful collaboration of developmentalists and social historians. Developmentalists investigate the process of children’s growth and socialization over time, whereas historians typically study children in a particular time and place. The book begins with studies that link historical life transitions in children’s lives, as observed during the years of World War II and the postwar era. It then turns to studies of historical variation in the effect of life transitions, from the onset of sexual experience to the process of becoming a father, and it concludes with an illuminating account of the cross-disciplinary workshop that led to the volume, its challenges and rewards. — For more information: — For more information: www.amazon.com. What are the most effective methods for doing life-course research? In Methods of Life Course Research, the field’s founders and leaders answer this question, giving readers tips on: the art and method of the appropriate research design; the collection of life-history data; and the search for meaningful patterns to be found in the results. — For more information: www.amazon.com. The Craft of Life Course Research brings together prominent investigators to provide a comprehensive guide to doing life course research, including an “inside view” of how they designed and carried out influential longitudinal studies. Using vivid examples, the contributors trace the connections between early and later experience and reveal how researchers and graduate students can discover these links in their own research. — For more information: www.amazon.com. The idea for this book emerged in the early 80s when a committee of the U.S. Social Science Research Council co-chaired by Elder launched a program to promote a dynamic life course approach by drawing on the unparalleled data archive of the Michigan Panel Study of Income Dynamics. This national study began data collection with 5000 American families in 1968 and it has continued doing so. The first two chapters describe the Michigan Panel which has become a model for national studies in Europe and the life course approach, featuring conceptual and analytic technic advances. The chapters that follow range from the micro-level of life transitions to the population level of birth cohorts. — For more information: www.amazon.com. In the research presented in this volume, the experience of change over the life course is illuminated by the simultaneous examination of person, process, context, space and time. Areas explored are individual differences in environmental risk, transgenerational perspectives on resiliency, nature/nurture and culture, bioecological models of intellectual development, gender differences in socialization, authoritative parenting, and turning points in adult lives. — For more information: www.amazon.com. Developmental Science provides an account of the basic principles of the new developmental synthesis, as formulated by the Carolina Consortium on Human Development. Individual chapters outline implications of the orientation for method and theory across traditional disciplines. The chapters address specific developmental issues, varying across time frames, methodologies, disciplines, cultures and even species. They provide an inside look at the issues that confront modern social and behavioral study, including its strengths and problems. — For more information: www.amazon.com.

The following links to some of Elder’s more frequently cited journal articles are provided to help you access the articles through the publishers’ websites.

The Life Course as Developmental Theory

Military Service in the Life Course

For copies of presentations Elder has made, click here.

Children of the Land:

“What is it about ‘ties to the land’ that influences the development of young people? The answers the authors provide are not only analytically compelling, but they reveal invaluable insights for solving many of the problems facing our urban
and suburban school communities as
they struggle to provide meaningful environments for socializing and educating our adolescents into productive adults.”
(American Journal of Sociology)

“The book provides a wealth of substantive information, innovations in methods, and numerous ideas for future research.
(Social Indicators Research)